Copycat Whiskey – the Story of Ezra Brooks and Jack Daniel’s.

Although it was founded in 1866, Jack Daniel’s really figured out marketing in the 1950’s.  Through the investment of $3.5 million dollars over a few years, Jack Daniels increased its sales by a staggering 900% between 1950 and 1956, when it was purchased by Brown-Forman.  The surge in demand actually created a legitimate shortage by 1957, and Jack Daniel’s had to allocate supply.

Kentucky Bourbon producers typically have not missed many opportunities to increase sales (often leading to the lawsuits that I’ve written about), and the high demand and low supply of Jack Daniel’s brought an imitator out from nowhere.  The case of Jack Daniel Distillery, Inc. v. Hoffman Distilling Co., 190 F. Supp. 841 (W.D. Ky. 1960) tells the story of how Frank Silverman created a brand without a distillery in 1957, which he called the “Ezra Brooks Distilling Company.”

Frank sourced Bourbon from the Hoffman Distilling Company in Lawrenceburg, Kentucky (DSP-KY-112), which at the time was still in the famous Ripy family.  Bourbon enthusiasts might recognize the Hoffman Distillery as the early bottling location for Pappy Van Winkle after Julian Van Winkle renamed it “Commonwealth Distillery,” and where other assumed names for bottling purposes have included A.H. Hirsch, Old St. Nick., Michter’s, and Black Maple Hill.

According to the court, Frank also sourced from other distilleries in addition to the Hoffman Distillery, but regardless of where it was sourced, Ezra Brooks was bottled in its early days at the Hoffman Distillery.  Frank was able to get his new brand to market by April 1957, just in time to take advantage of the shortage of Jack Daniel’s.  It was clear to the court that Frank “intentionally copied and imitated the appearance of the well-established and attractive Jack Daniel’s Black Label package and advertising techniques for its new and unknown brand Ezra Brooks.”

Frank’s lack of originality and misrepresentation to the public about the availability of his new brand were not enough to win the lawsuit for Jack Daniel’s, however.  The court ruled (and it was upheld on appeal) that because Frank used a completely different name for his brand, and because the source – Tennessee vs. Kentucky – was clearly marked on the labels, Jack Daniel’s could not prove that Frank was unfairly competing or attempting to pass off Ezra Brooks as Jack Daniel’s.

Hot of this victory, Frank continued to pretend that Ezra Brooks was in limited supply, as shown in this 1965 ad provided by our friends over at Bourbon & Banter (check out http://www.bourbonbanter.com/ and on Twitter @BourbonBanter): 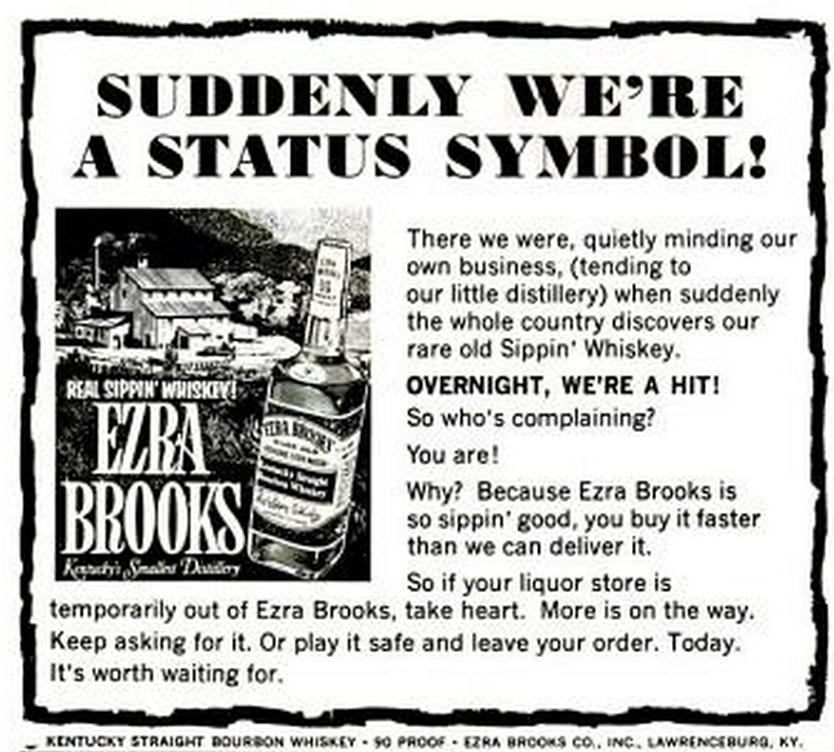 The Ezra Brooks brand then passed as an assumed name around the industry, including Jim Beam, Julius Wile Sons & Co., Medley Distilling Company, and more recently Luxco, with distillation by Heaven Hill.  Many of the subsequent owners of the brand continued to market Ezra Brooks as a substitute for Jack Daniel’s, as shown in this 1983 ad: 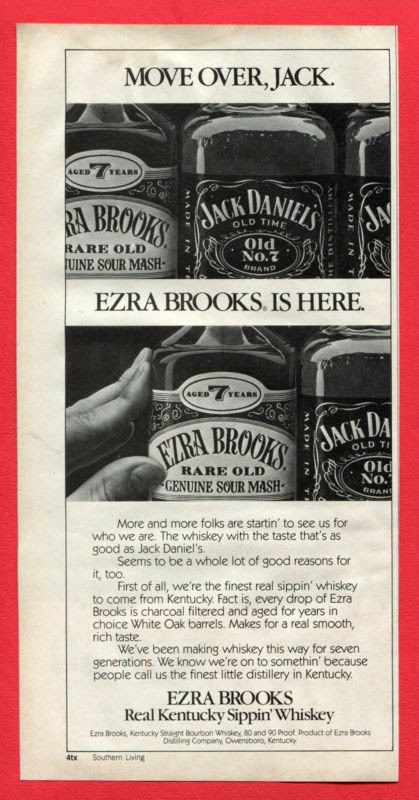 The current website for Ezra Brooks doesn’t focus on Jack Daniel’s, and doesn’t pretend that Ezra Brooks is in short supply, but it still seems to make a few unsupported claims.  For example, the prominent “Seven Generations” claim can’t be true for a brand that was created in 1957. 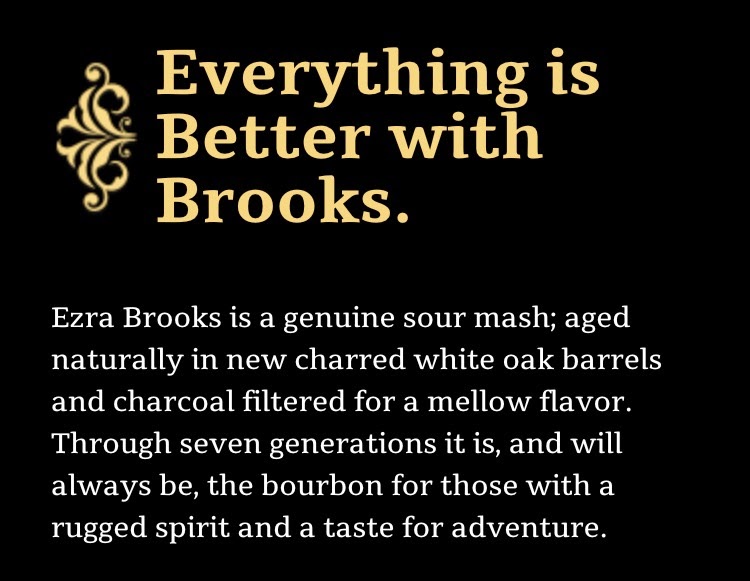 The initial involvement of the Hoffman Distillery is ignored, instead claiming that the brand started with Medley in Owensboro.  Additionally, calling 1901 “the beginning of the 19th century” should have been “20th century.” 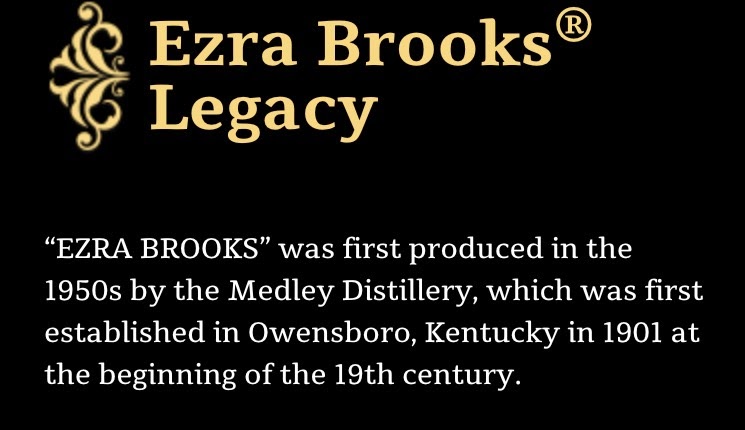 Then there’s the claim that “Ezra Brooks Distilling Co. was praised by the U.S. Government in 1966 as ‘Kentucky’s Finest Little Distillery.’” 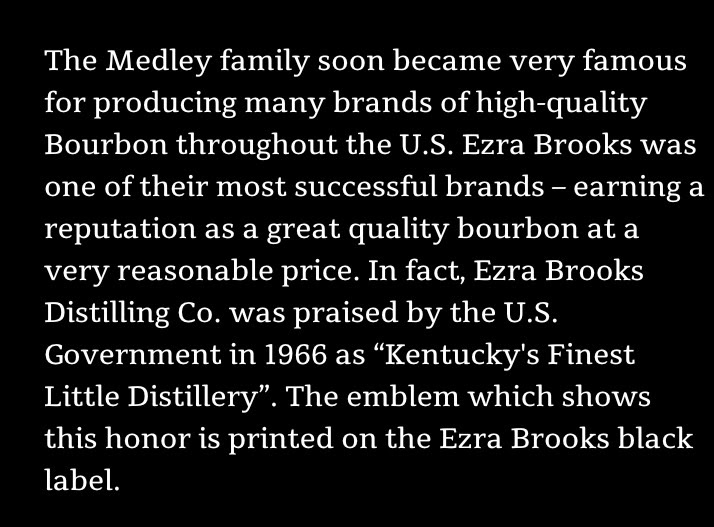 Whatever distillery (or distilleries) Ezra Brooks sourced from in 1966, it clearly was not the large-scale factory operated by Heaven Hill which produces Ezra Brooks today, so the whole “Kentucky’s Finest Little Distillery” bit should be removed from contemporary bottles.  Plus, I could not find any such published “praise.”


While it may be true that “imitation is the sincerest form of flattery,” I don’t blame Jack Daniel’s for not being flattered.  Too many brands with no real history and questionable provenance take roads similar to Frank Silverman.  A Tennessee Whiskey might not be able to win a lawsuit against a Kentucky Bourbon, but consumers can drive change where the courts don’t.
Posted by Sipp'n Corn® at 5:28 PM