Talk of Bourbon barrels in Scotland almost always refers to used Bourbon barrels – where in their second life they mature Scotch.  I’ve wondered how much flavor different barrels can impart, depending on things like how long they held Bourbon, their char level, and the type of Bourbon they aged (certainly a high-rye Four Roses barrel will result in a different Scotch than a Heaven Hill barrel that aged a wheated Bourbon, right?).  And how much flavor is left in former Bourbon barrels, as an overall component of Scotch, especially when sometimes the barrels are used up to three times for Scotch? 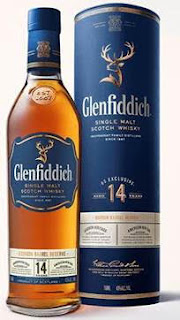 Now, after aging whisky for 14 years in former Bourbon barrels, Glenfiddich has finished that whisky in new charred American Oak barrels from Louisville’s Kelvin Cooperage, to “deliver a bourbon heart with the soul of a single malt.”  Related to my interest in the influence of barrels, I inquired into the specifics of the finishing here.  Brian Kinsman, Glenfiddich’s Malt Master, provided the answers.

I learned from Brian that Glenfiddich finished this whisky for four months, using a 3.5 char level in the Kelvin Cooperage barrels.  The finishing period may vary, but typically will be three to four months.  Entry ABV at the time of finishing was about 60%, and this percentage does not change materially during finishing.

Glenfiddich used new charred oak barrels for finishing in order to add intensity and sweetness, along with a color more associated with Bourbon.  Climatic conditions in Scotland don’t encourage the same degree of interplay between spirit and wood as in Kentucky, so I expected the contribution of four months to be subtle.  Either way, I envy the research team that got to play with varying amounts of time for finishing before reaching the desired profile.

Disclaimer: Glenfiddich kindly sent me a sample
for this review, without any strings attached.
Thank you.

Color:
Bright amber and darker than single malts of this age, presumably from the time spent in new charred barrels.  Straight Bourbon fans will be curious about the color without additives, but this is Scotch, so we’d better get over it; Glenfiddich is able to add a small amount of caramel coloring to ensure consistency between batches.

Nose:
Unmistakably Scotch, but reminiscent of Bourbon at the same time.  There’s some oak, but overall it’s light and fresh, with vanilla, honey, ripe pear and honey crisp apple, and a bit of fresh citrus.  The nose did not pick up much caramel aroma from the new barrels, which I thought it might, or perhaps I’m just used to heavier caramel aromas from Bourbon.

Taste:
First and foremost, this is single malt Scotch; there’s no mistaking 100% malted barley for at least 51% corn plus rye, giving Bourbon sweetness and spiciness.  Glenfiddich 14 Year is silky and rich, with sweet flavors of vanilla and honey, along with light, ripe fruit and orange zest.  The finishing barrels add a lovely subtle oakiness and flavor of raw almonds for a great slow-sipping whisky.

Finish:
The finish is medium in length with lingering warmth, and some more oak, although predominantly sweet.

Given the origin of American distilling and our shared history, it makes sense that Scotch devotees will want to try Bourbon, and that Bourbon enthusiasts will want to try Scotch.  Those who have not yet found the balance between whiskey and whisky might also have preconceived notions about the other, like Bourbon is always candy-sweet or all Scotch tastes like that heavily-peated variety that took you by surprise.  Glenfiddich 14 Year bridges that gap remarkably well.

One reason that it bridges the gap so well is that Glenfiddich has not tried to create a whisky that tastes like Bourbon, instead finding a way to remain distinctively Scotch while capturing some of the influences of Bourbon.  Glenfiddich 14 Year won’t be confused with Bourbon – it’s missing caramel and a robust punch of spice – so I’m keeping my Bourbon, but I’ll be looking for Glenfiddich 14 and it will get me to try more Scotch, which perhaps was the goal of this release all along.


While Glenfiddich 14 Year is a new permanent member of the Glenfiddich line, it is only being released in the U.S., with plans to keep it here exclusively.  Glenfiddich 14 could certainly enjoy a broader audience, so for those who can get it, I recommend giving it a try, especially the Bourbon enthusiast who is curious about Scotch. 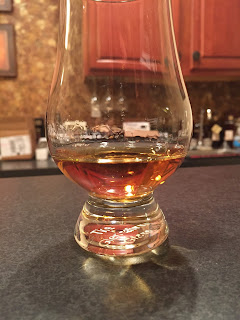 Glenfiddich 14 certainly has the color of Bourbon...
Posted by Sipp'n Corn® at 4:00 PM