Color:
Amber with an orange tint.

Taste:
Rare Breed is smoother than many other bourbons of similar proof.  It has a hint of citrus and big kick of spice.  A splash of water opened up sweeter flavors like caramel, but you have to be cautious about over-diluting because the spice was too quick to disappear.  A single large ice cube did just as well at bringing out the sweetness without sacrificing the spice.

I finally went on the Wild Turkey tour last August.  Getting to go into Warehouse A – built in 1890 over the Kentucky River – was a highpoint for me, but the tour of the modern distillery was a little sterile.  I’ll definitely go back for the new visitor’s center, but my tour still ended in the tiny tasting room of the cramped old house that served as the visitor’s center.  We got to choose three out of five offerings, which unfortunately did not include Kentucky Spirit.  Of the five available, the two that I was most interested in were Russell’s Reserve 10-year and Rare Breed.  Between the two, Rare Breed was my clear favorite.  The nose of Rare Breed was better and the spice in Russell’s Reserve was a little prickly.  So I knew that I needed to do a little more research with my own bottle of Rare Breed.

I was pleased to find that it was even better than I had remembered from the tour.  Rare Breed has the heat, the flavor complexities and the finish that we’re all looking for.  I tend to prefer some more fruit flavors to balance the spice, but I didn’t really miss those flavors here.  Occasionally, however, there was some harshness and bitterness.  That was usually tamed by a splash of water or a single large ice cube, but as noted above, there’s not much room for error before you over-dilute.

Maybe that’s why they say that Jimmy Russell recommends serving Rare Breed chilled from the freezer.  He certainly knows more about bourbon than I’ll ever hope to know, but after several tastings, I still prefer my Rare Breed with a large ice cube in order to open up the sweeter flavors.

As so many more bourbons fly past the $50 mark and beyond, $40 is quickly becoming the new $30 in bourbon, and Rare Breed is knocking on the $40 door.  Fortunately, there are several excellent bourbons still priced in the high $20’s and low $30’s; I just wish that Rare Breed was one of them.  While it may be on the verge of overpriced, I highly recommend that you include a bottle of Rare Breed in your home bar.

1 – Wouldn’t even accept a free drink of it.
2 – Would gladly drink it if someone else was buying.
3 – Glad to include this in my bar.
4 – Excellent bourbon.  Worth the price and I’m sure to always have it in my bar.
5 – Wow.  I’ll search high and low to get another bottle of this. 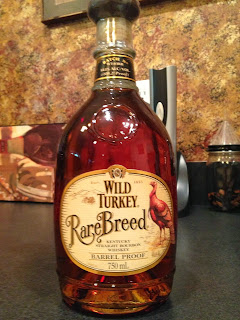