For this Bourbon Review, I wanted to find three bourbons aged exactly the same number of years, all with rye as the secondary grain, and all with similar Proof, but priced very differently.  Three bourbons meeting those criteria are Eagle Rare Single Barrel 10-Year, Bulleit Bourbon 10-Year Small Batch and Michter’s Single Barrel 10-Year, so “The 10-Year Challenge” was born.  Would the hard-to-find, expensive bourbon come out on top?  Or would the readily-available $30 bottle teach us all a valuable lesson?

The first glass was a favorite of many of our tasters right away.  The nose was light and not particularly complex, but pleasant.  Common tasting notes included a nice balance of oaky and sweet flavors.  The finish was dry and short to medium.

Two of the tasters had an immediate negative reaction to the second glass.  But overall, reviews were good (ultimately just not better that the first and third glasses).  The second glass had a much more fragrant nose than the first, which was followed by a bolder taste and more complex and longer finish.  Caramel, vanilla, oaky, citrus and aggressive spice were all common tasting notes.

The third glass was noticeably darker in appearance, a rich caramel compared to the lighter amber of the first two glasses.  Like the second glass, the nose was much more prominent and bold, but it differed from the second glass by having more of a smoky, earthy nose.  Tasting notes were dominated by comments about its complexity.  Licorice, oak, caramel, vanilla, sweet corn, buttery, and warm spices were all noticeable.  The tasters liked the comparatively longer and warmer finish, too.

I had some initial hesitancy about including two NDP (non-distiller producer) bourbons compared to just one bourbon, Eagle Rare, where the distillery, Buffalo Trace, is known.  I even received some immediate Twitter feedback from my post on the night of this event for including two NDPs.  But I got over this hesitancy pretty quickly because Bulleit and Michter’s fit the theme, popular belief is that this Bulleit is a Four Roses recipe, and good bourbon is good bourbon, no matter what liberties marketers take.

I was pleased to see that, despite their similarities, these three bourbons were all very different from each other and that no one bourbon stood out from the others.  That lack of separation, however, requires consideration about price.  The Eagle Rare is the clear price-performer of the three, and given its results at the tasting, Eagle Rare 10-Year is a no-brainer to add to your shelf.

But personally, I scored the Bulleit higher than anyone else (then again, I’m also a big fan of Four Roses).  I think that the tasters who preferred Eagle Rare would probably prefer Bulleit in a cocktail because its bolder flavors don’t get lost, so depending on how you plan to drink these bourbons, my recommendation would change.

Finally, even though it was the overall winner and even though I really liked it, I expected the Michter’s to completely wow me (it didn't).  For anyone else who expects an almost $90 bourbon to wow them, then you may be better off sticking with Eagle Rare and Bulleit, which are readily available everywhere.  Still, Michter’s won The 10-Year Challenge, and its profile is very different than the other two options, so if you’re splurging and can find it, it's worth a look.

My final recommendation is that while Eagle Rare 10-Year, Bulleit 10-Year and Michter’s 10-Year may be better than each other on different occasions, all three are great buys that deserve room on your shelf. 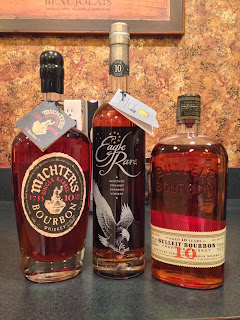