Taste:
More spice comes through than indicated from the nose, but sweetness still predominates, although not overpowering.  Mostly honey, caramel and toffee flavors, but with an interesting balance of oak, cinnamon and spice.  Not overly spicy or hot, but comforting warmth.  A splash of water opened up some more fruit and sweetness, but it lost complexity, so I prefer this one neat.  This was really a wonderful balance.

For starters, I can’t believe this is a low-$30’s bourbon.  Also, while I’m a huge fan of Blanton’s, I’m not sure why I’d spend the extra money on it.  ETL uses the same mash bill as Blanton’s Single Barrel (the Buffalo Trace mash bill #2, maybe about 15% rye, used for all Ancient Age bourbon), and ETL is aged for about nine years compared to around six years for Blanton’s, although Blanton’s is aged in Warehouse H, said to have been Col. Blanton’s favorite.  Regardless, ETL is deep and rich, but at the same time so drinkable without a drop of pretentiousness.  This can really be your go-to bourbon.

On top of its outstanding balance, ETL has the legitimate history of the legendary Elmer T. Lee (1919-2013) himself, who has an incredible story starting with being hired (but initially rejected) by Col. Blanton when Buffalo Trace was called the George T. Stagg Distillery, and working his way up through the ranks .  (Please check out the University of Kentucky Louie B. Nunn Center for Oral History interview of Elmer T. Lee posted here:  http://www.nunncenter.org/buffalotrace/category/people/elmer-t-lee-interviews/ along with the short bio posted here:  http://www.buffalotracedistillery.com/craftsmen/lee ).  With so many bourbons having fake histories and “master distillers” who are blenders at best, it’s comforting to know that Elmer T. Lee is about real history.

1 – Wouldn’t even accept a free drink of it.
2 – Would gladly drink it if someone else was buying.
3 – Glad to include this in my bar.
4 – Excellent bourbon.  Worth the price and I’m sure to always have it in my bar.
5 – Wow.  I’ll search high and low to get another bottle of this. 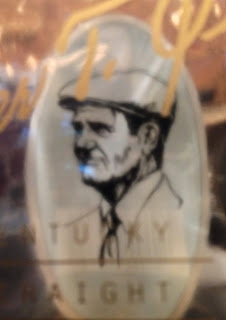