For this Bourbon Review, we compared three Woodford Reserve bourbons from three price-points.  The entry-level Woodford Reserve is generally well-liked, but it has its share of critics for essentially being expensive or for being too soft.  The Woodford Double Oaked generally gets some better reviews, while the Four Wood has a few supporters but mostly detractors.  I wanted to see whether – even within the Woodford family – it’s best to stick to basics.

Bourbons in order of blind tasting:

The first glass had a clear amber appearance and a light nose of caramel and fresh herbs and corn.  It was followed by a sweet taste of corn, caramel, vanilla and slight fruit, and it was immediately recognizable by the tasters; so much for the blind tasting.  The finish was moderate, with more light and sweet flavors, and not much warmth.  Given the proof and the light flavors, this is a bourbon to drink neat, although the chill of a single large ice cube or sphere works as well.

The second glass was slightly darker in color, more of a deep copper, with a more complex nose, taste and finish.  It was recognized as being related to the first glass, but it filled in many of the gaps of the first glass.  The nose had more earthy tones like leather and walnut, along with new hints of brown sugar.  The taste still had similar caramel sweetness, but added new oak flavors and spicy warmth, with honey and spiced apple cider.  The finish was smoky and slightly warm with a balance of rich caramel, with moderate length, although a little longer than the first glass.  This bourbon was best with the slow melt of large ice.  Water or too much ice seemed to give it a medicinal finish.

The third glass was the darkest of the three in appearance, but what really stood apart was the nose.  The nose was as complex as we’ve experienced.  It was very sweet with toffee, floral tones (roses?) and berries, but to me, it smelled like the sweet corn of a bubbling fermentation tank.  The taste, unfortunately, was harsh and the numerous flavors of corn, maple, oak, leather, spice and vanilla seemed to be competing instead of complementing each other.  Plus, the taste was nothing like the nose predicted.  Similarly, the finish had the same disjointed flavors.

Double Oaked was narrowly preferred by the tasters, but Distiller’s Select seemed to be the comfortable choice, and when taking value into account, Double Oaked really loses ground.  The safest bet is to call a draw.  The Four Wood was a distant third with most tasters – except one who rated it first.  While the nose of the Four Wood was truly remarkable, most of us thought that the rest of it just fell apart.

Those in the know say that Woodford Reserve and Old Forester share the same mash bill (72% corn; 18% rye; 10% malted barley) and yeast strain, and that Distiller’s Select contains bourbon distilled at both Versailles and Louisville.  So while the standard Distiller’s Select is certainly popular, many people stick with the very affordable “Old Fo” (sometimes known as Louisville’s house bourbon).  It’s hard to argue with that logic.  Either bourbon is a comfortable option, but make no mistake, they are different Bourbons.  The blending of Bourbon distilled at Brown-Forman and Bourbon distilled in Versailles was the subject of a lawsuit in 2003 that I'll write about later, and it has also been confirmed by Chris Morris.

Master Distiller Chris Morris is known to take some chances, and thankfully Brown-Forman encourages this, but the latest in the “Master’s Collection” is a miss.  The shtick this time is that standard Woodford Reserve was aged in four types of wood – American White Oak, where it is aged to maturity, then followed by maple barrels, Sherry barrels and Port barrels for finishing.  Brown-Forman should keep trying these innovative finishing expressions, but selling an iffy product for $100 is just going to give this series a bad name.

Double Oaked:  It’s priced high for a NAS bourbon barely over 90 proof (I’d expect to see it in the low-$40’s), but especially if you already have your other bourbon staples, Double Oaked is still a high recommendation for your home bar.  The price really keeps Double Oaked from scoring higher.

Four Wood:  Completely avoid Four Wood, especially at this price.  Hopefully you can avoid it since it is a limited edition.  I’ll pay for experiments and innovations that turn out well, but nearly $100 for this NAS bourbon at 94.4 proof is way too much.  There were certainly other 2013 limited editions that retailed for similar prices, but were vastly superior. 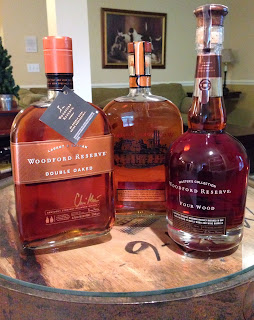