Back when I was at the University of Kentucky in the early-and-mid 90’s, I had a 1979 Chevy Impala.  Despite it being my first car – and sentimentally the favorite car I’ve ever owned – it always needed a lot of mechanical work.  So I made many, many trips to Ferrell’s, which was on Manchester St., north of Rupp Arena.  It was in a dark, run-down, formerly industrial area of town, and I had no clue that I was driving past a slice of Bourbon history.

When I started learning about James E. Pepper and his distillery, I hunted down the distillery site, and found it in ruins, but I was happy to see Ferrell’s still going strong.  While the Pepper distillery was pretty apocalyptic, the entire site is being gutted and renovated, and a micro-distillery has been operating on site for years.  The site as undergone huge improvements recently, as shown in these comparison pictures: 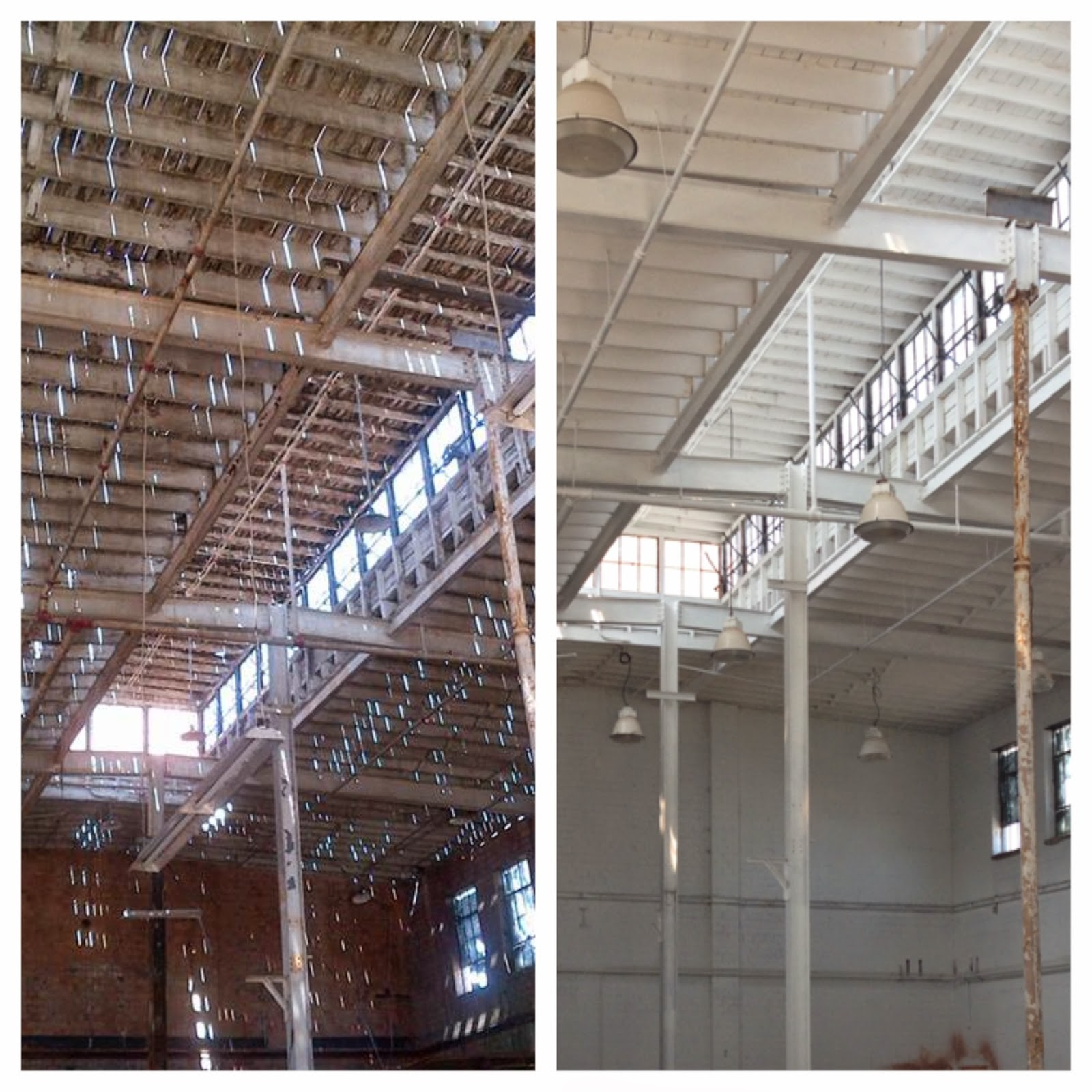 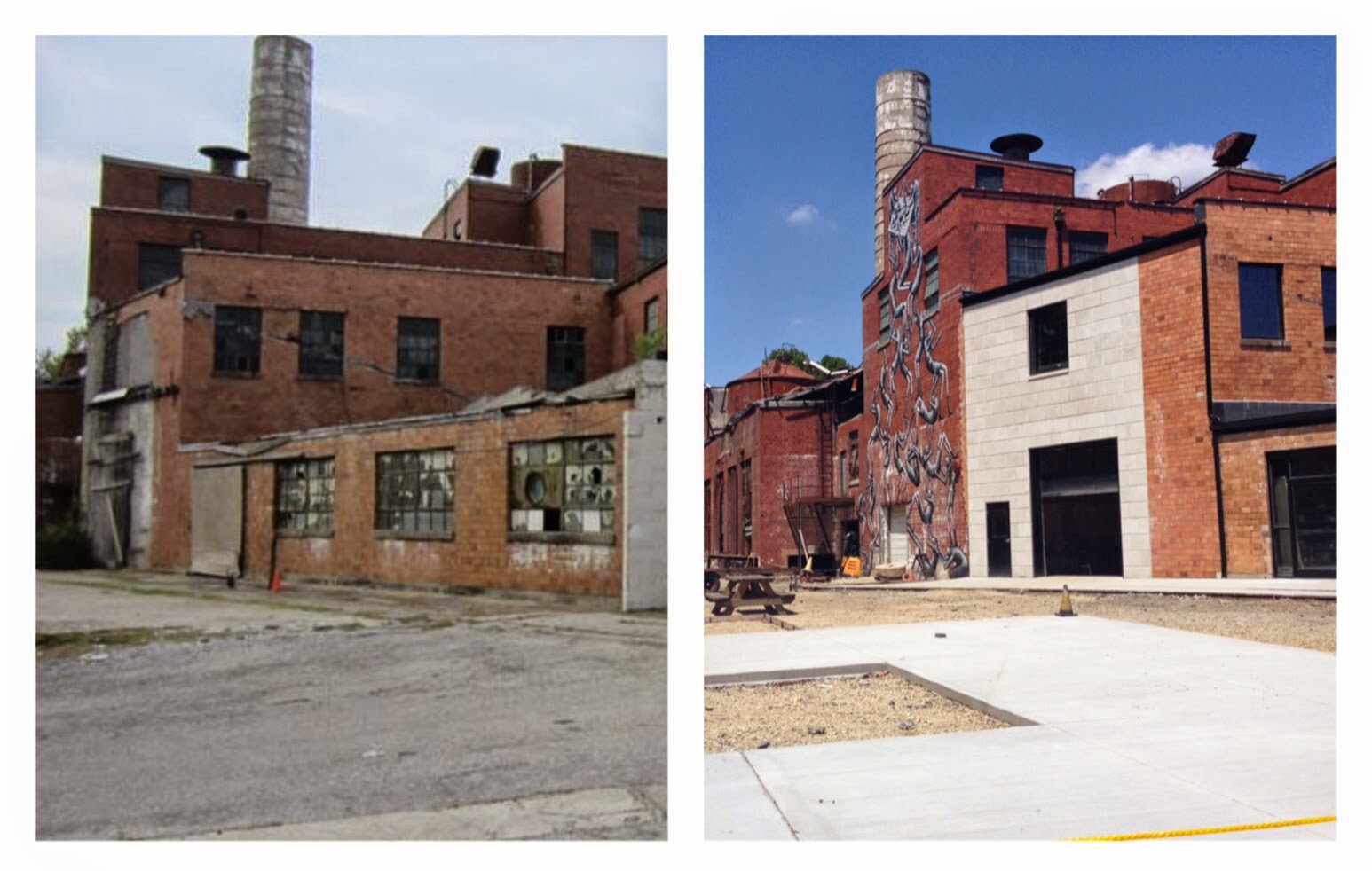 But the Manchester St. side is still an eyesore: 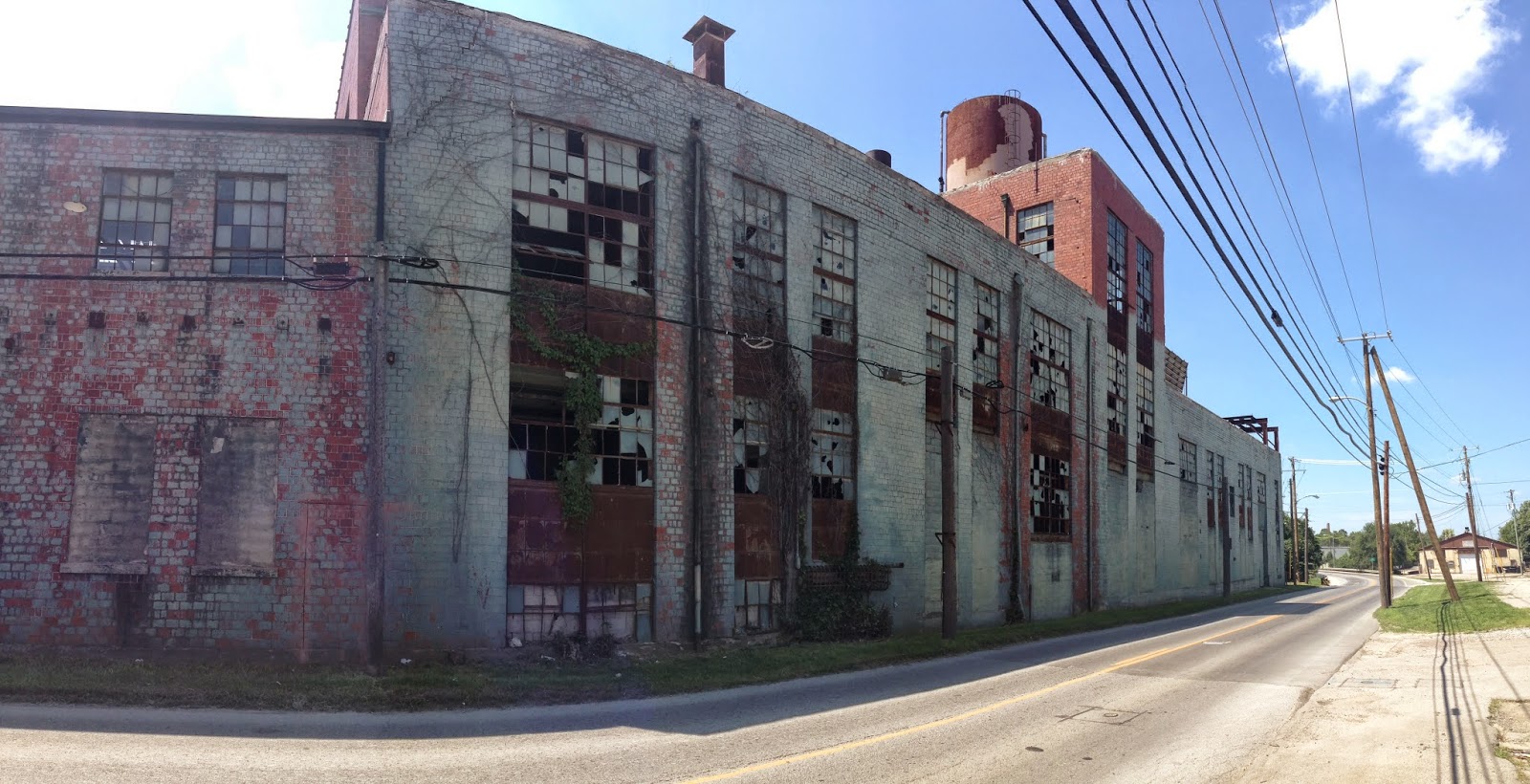 This all brings me to my latest stop on the Kentucky Bourbon Trail Craft Tour, the Barrel House Distillery, home of Devil John Moonshine, in a former barrel house of the James E. Pepper Distillery.  Barrel House Distillery produces Bourbon-barrel aged Rum, Pure Blue Vodka (made from 100% corn), Devil John Moonshine, a soon-to-be-released Bourbon barrel aged Moonshine, and – importantly – Bourbon.  Although the precise mash bill is a secret, in round numbers the Bourbon is made with 60% corn, 30% wheat and 10% barley.  The oldest Bourbon is six years old, and while it isn’t ready yet, Barrel House is hoping for early 2015.  Barrel House Distillery uses a 130-gallon pot still, and ages its Rum and Bourbon in a separate part of the same building, using Buffalo Trace barrels for the used barrel aging, mini-barrels from Kelvin Cooperage for its Bourbon, and standard 53-gallon barrels for its older Bourbon. 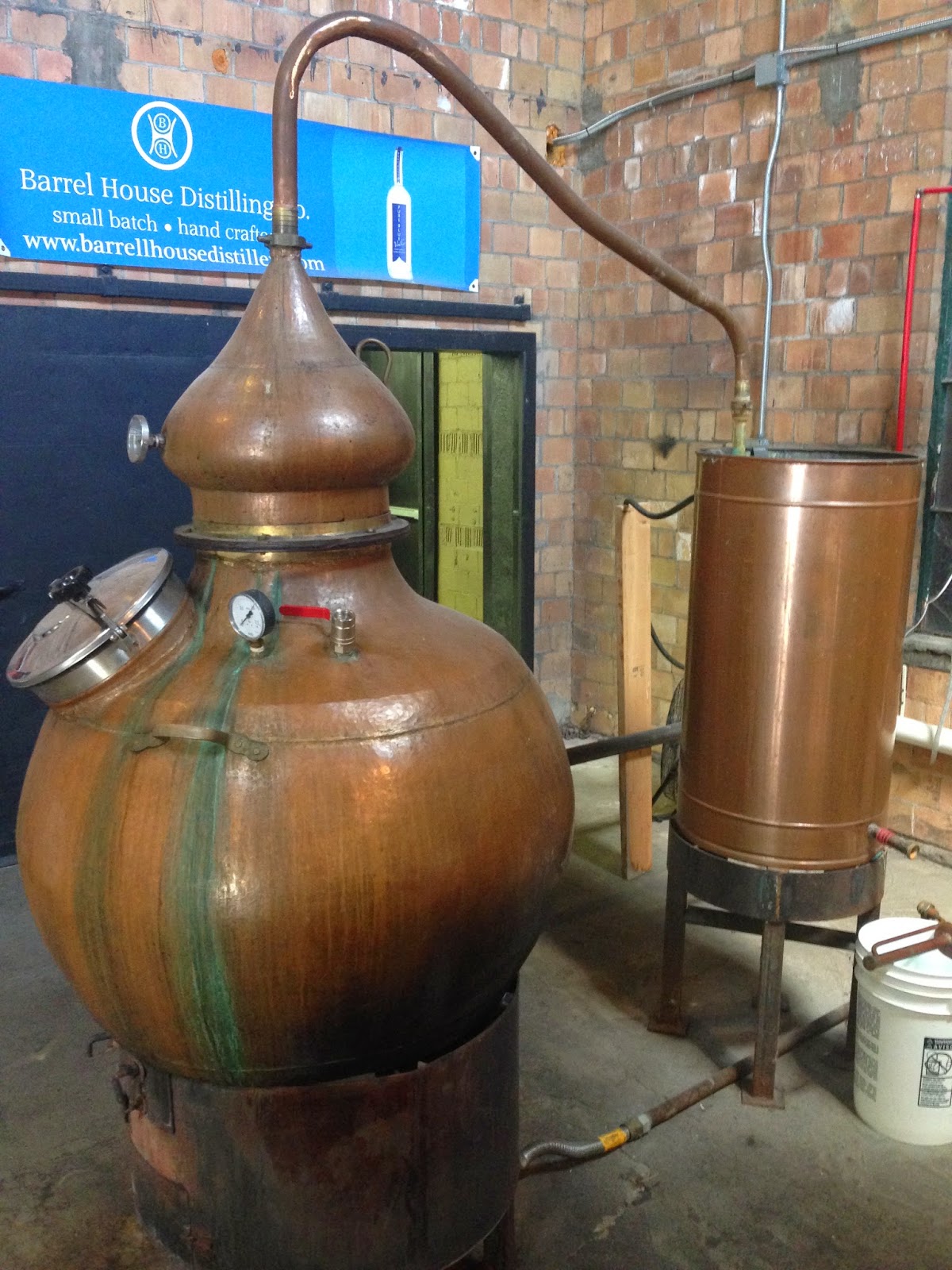 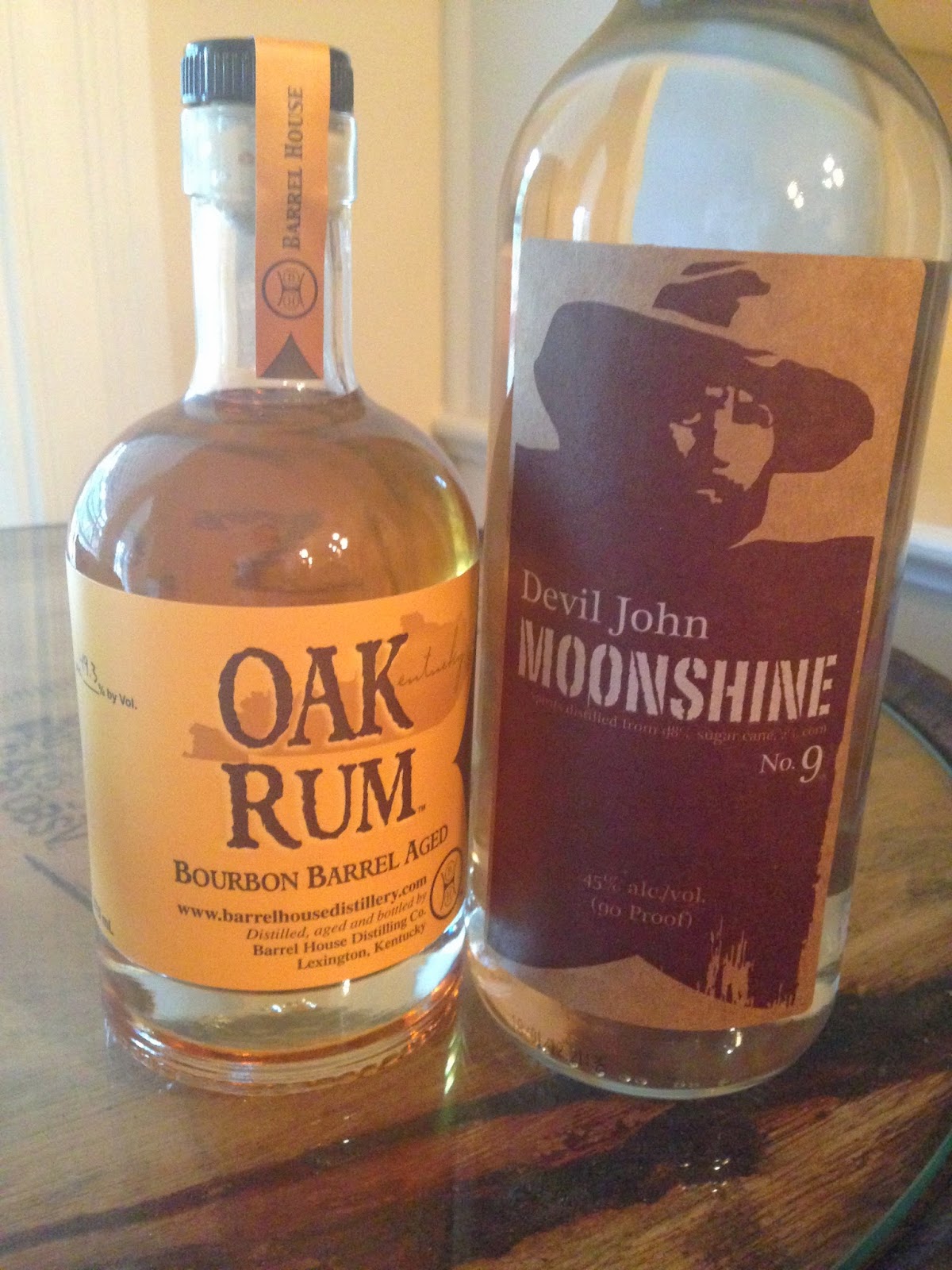 Devil John Moonshine was originally sold at 90 proof in a tall bottle, although now Barrel House has switched to a more authentic, shorter bottle (and thankfully not a hokey mason jar), and is bottling at 100 proof.  The retail price that I paid was $21.99, although I’ve seen it priced at $24.99.  (The 90 proof version is on sale now at the gift shop for $19.99 to clear inventory.)  This moonshine is distilled with a vast majority of sugar cane, but also with some corn.  The nose is more aromatic than I expected, with less of an ethanol hit than is typical with some moonshine.  The flavor combines the rum sweetness of sugar cane and corn graininess.  It finishes with more corn sweetness, and while not particularly complex, it’s a longer finish than I expected.  Still, overall, Devil John ought to be limited to an alternative for mixing.

The Oak Rum comes in a 375ml bottle, retailing for $24.99.  The used Bourbon barrel aging gives it a light amber hue, and in this case, it was bottled at 98.6 proof.  I’m typically not a rum drinker, so I was hoping that the Bourbon barrel flavors would shine through.  The nose was mostly sweet, but added dimensions of citrus and oak.  Like the nose, tropical sweetness dominated in the taste, but the sweetness was balanced out by magic that was left in the Bourbon barrel – caramel, vanilla and oak – which also helped bring some earthiness to the finish.  Overall, this never had a prayer of swaying me away from Bourbon, and I’ll be sharing it with Rum fans to get their impression.


In the meantime, definitely add Barrel House Distillery to your list for the Craft Tour, and I’ll be on the lookout for the wheated Bourbon in 2015.
Posted by Sipp'n Corn® at 5:13 PM