Private selection barrels are hot items.  Retailers, serious whiskey bars, and local whiskey societies desperately want them.  Unfortunately, the demand has resulted in some distilleries being overbooked, some are low on available stock, some give a take-it-or-leave-it option of barrels that are nothing special, and some have had to suspend their barrel selection program. 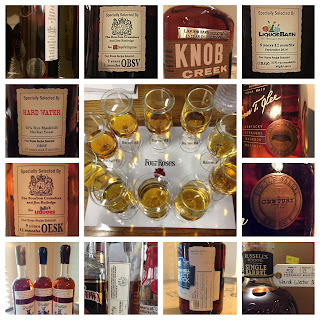 For the most part, the barrels offered for selection are going to be superior barrels.  This does not mean, however, that privately-selected Bourbon is going to taste better than the standard issue of that brand.  Sometimes private barrels are not better, they’re just different.  Oftentimes, they can essentially taste the same as the standard, less expensive bottles, and occasionally, they’re disappointing because they’re not as good as the standard offering.

A private selection can be disappointing due to the lack of experience of the selection team, or because their personal preferences are a little off, and you can end up with a Bourbon that is too bitter, bland, or unbalanced.  Additionally, very few distilleries permit bottling of private selections at barrel strength, so when proof is taken down, the flavors in the private selection change and it might not taste anything like it did straight from the barrel, so the selection team has to toy with adding the right amount of water.  The key is that consumers need to look for private barrels from palates they trust.

In some circumstances the stars line up, a knowledgeable selection team has access to enough barrels, and fate includes a true honey barrel in the mix.  A quick Twitter survey (thanks for all of the tweets!) came up with a great list of retailers and bars who have selected your favorite private barrels.  Four Roses, Smooth Ambler, and Willett (whose program is now on a hiatus) absolutely dominated your tweets, with an occasional Old Weller Antique, Knob Creek, Woodford Double Oaked, and a few others rounding out the list.

Certain retail stores have gained a reputation through consistently great picks across all distilleries, like Liquor Barn, or an award-winning selection, like Crown Liquors with its 2014 Four Roses OBSK pick.  Bars and restaurants with private barrel programs can become renowned for their picks too, like many Louisville establishments (as should be expected), but non-Kentucky players, too.  Dry 85 in Annapolis, for example, has an outstanding private barrel program, but it goes a step further and has also worked with Angel’s Envy on developing unique private blends.

Consumers are starting to look not just for any private barrels, but for barrels with particular characteristics, like OBSK and OESK barrels aged on the East side of Warehouse M at Four Roses (“ME” barrels), and odd 65 gallon barrels stored upright at Heaven Hill for 15 years (which became part of mysterious private barrel of Heaven Hill Select Stock).  Keep an eye and an ear tuned for these kinds of tips because this sort of information can help give the consumer confidence that the extra money will be worth it.

I haven’t been lucky enough to try any of the Doug Philips selections, Wheated Warrior, or Aged Truth, but I’ve been amazed by the quality of private barrels that are more readily available.  Some of my favorite private barrels over the past several years (not necessarily ranked in order) have included:

·         2014 Heaven Hill Select Stock, 15 year from 65-gallon barrels, selected by Bourbon Bar (despite being on the menu as a $40 pour, these bottles were returned under a shroud of mystery, and have since trickled out into retail);

What has been your favorite private barrel selection?  Which retailers and restaurants or whiskey bars routinely stock the best private barrels?  Your Twitter responses gave the following stops for an epic road trip across the U.S.:

Which stores or bars are missing from this Twitter list?  Please add your favorites in the comments below.  Cheers!
Posted by Sipp'n Corn® at 12:12 PM