Many enthusiasts will scoff at the idea adding anything to their Bourbon.  Most will acknowledge that a small amount of water can help open up flavors in some Bourbon, but it’s risky because it mutes the flavors sometimes, and there’s a risk of over-dilution.  Ice can be more controversial than a drop of water.  In a recent trip to Scotland, the distillery tour guides uniformly berated the idea of Scotch over ice.  Here, sentiment is much more forgiving, and personally, some hazmat-proof Bourbons become absolutely perfect with the slow melt of a single large cube or sphere.

Before you add water or ice to your whiskey, think before you turn on the faucet or open the freezer.  Water that is too hard or too soft, or which has too many minerals (or the wrong minerals), can influence the taste of your whiskey.  As your ice melts it can create those same issues, and if your freezer has an odor, it can be absorbed by your ice, and then your whiskey.  I’ve been to too many places with funky water that I’d never let get near my Bourbon.

In Louisville we’re blessed with fantastic tap water, so it is not really a concern here.  Louisville’s tap water has 159 mg/L of calcium carbonate per gallon, making it “moderately hard” (the range to avoid “soft” or “hard” designations is between 60 mg/L and 180 mg/L).  Although the Ohio River is Louisville’s water source, most of Kentucky’s interior rivers and spring-fed streams drain into it, thus contributing to Louisville water.  Louisville has won national and international awards for its water purity, quality, and taste, and when it costs a penny per day for 60 8-ounce glasses of water, there’s really no point for a Louisvillian to buy bottled water.

Of course, there’s a solution other than moving to Louisville for those who want to assure the quality of their water and ice.  Old Limestone bottles limestone-filtered Kentucky spring water.  Kentucky’s aquifer and naturally limestone-filtered, iron-free water played a role in the early development of Bourbon (along with frontier freedom, perfect weather, and abundant corn crops), and many people swear that Kentucky spring water is perfect for adding a splash back to Bourbon.

Tudor Ice Company traces its roots to 1806 when Frederic Tudor harvested ice from New England and shipped it to the Caribbean, and succeeded in convincing consumers that they wanted and needed ice.  Electric refrigeration put an end to the business, but now Tudor’s descendants are launching a reinvented Tudor Ice Company with pre-filled, sealed ice molds, using distilled water that removes most dissolved solids.  Tudor also uses a patent-pending process to remove dissolved oxygen from the water to create a denser ice cube.

Some people take their water and ice very seriously.  Bar ice has exponentially more surface area than even everyday home freezer cubes, which results in a fast melt and watered-down whiskey, so many people avoid standard bar ice.  For home use, most sphere molds have a release hole, which allows excess water to escape when filling the mold, and which also allows for expansion when freezing.  As an aesthetic annoyance, this also creates a small protrusion on the sphere.  For the truly obsessed, ice sphere presses can set you back over $1,000.00.  Some enthusiasts also strive for clarity in their ice.  If you have the time and inclination to do something that won’t affect the taste, you can boil and cool water twice to remove dissolved gasses that cause cloudiness. 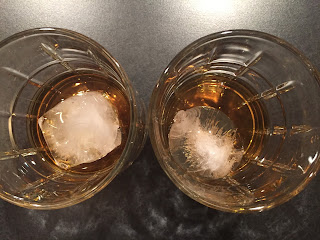 To test the Tudor cube, I compared it to a sphere made with Old Limestone water, after freezing both for 24 hours.  My current sphere mold is silicone, so the spheres pop out effortlessly, but I’ve noticed that they are not particularly dense.  The Tudor cube mold was a little difficult to pop out, but its density was unmistakable.  I poured two ounces of 58.6% ABV Four Roses OBSV into each glass, and sipped them equally.

The first sip from each glass showed that the cube – which of course had more surface-area contact – had added a little more water to my Bourbon.  Additionally, after about eight minutes, my Bourbon had carved into at the cube, whereas the sphere was had a more even melt and was egg-shaped.  The sphere seemed to be performing better.

After about 10 minutes, however, the tide turned dramatically.  My Bourbon with the Tudor cube was much colder than my Bourbon with the sphere, and the sphere was melting fast.  By 14 minutes the sphere had essentially disintegrated into a small jagged mess with one curved side.  My Bourbon was considerably lighter in the glass with the sphere, and had that watered-down taste we want to avoid.  In the other glass, the cube still held its structure.  After 20 minutes, the cube looked more like a flat-top mushroom, but it was still sizeable, and my Bourbon was not at all watered-down.  This is when I called the experiment and finished each glass.

The taste of both Tudor and Limestone was equally remarkable, clean, and refreshing.  Both of these are perfect water for adding to Bourbon.  I was not about to ruin a fantastic Bourbon (even in the name of science) with water containing iron or some odd aroma, so I cannot offer a comparison or suggestions on water to avoid.  I also did not compare these to Louisville tap water, which might have performed just as well, although I never could have been able to replicate Tudor’s fantastic density.  Regardless, the quality of your water and ice can definitely make a difference, so sip wisely my friends.

Disclaimer:
Tudor Ice Co. and Old Limestone both kindly
sent me samples to try,
without any strings attached. Thank you.
Posted by Sipp'n Corn® at 11:50 AM