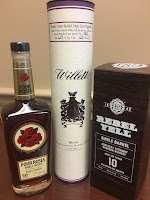 Bankers know value, right?  Whether it’s getting the right collateral, predicting trends, identifying the best investments, or knowing when to buy and sell, value is the key for banks because that’s what drives earnings.  But can bankers identify value in bourbon?

I decided to explore this with a group of Louisville bankers in a blind bourbon tasting.  First up was Rebel Yell 10-year, a bourbon that is moderately-priced but highly-acclaimed among enthusiasts; then Al Young’s 50th Anniversary, a highly-anticipated limited release that sold out immediately, then had some notable detractors, but lately has been skyrocketing on the secondary market; and finally the bourbon flipper’s ROI dream—a single barrel gift shop release from Willett.  All three bottles were freshly opened and poured about 20 minutes before we started.

Ten of us tried all three blind (I was the eleventh) and ranked them.  Then—before revealing the brands—I revealed the original cost and the current secondary price to see what those did to “value.”  Lastly, I revealed the brands to see how much the brand added to value. 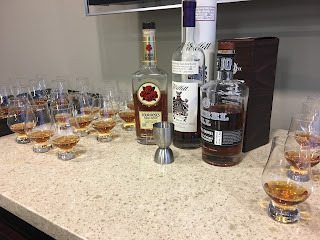 The Contenders (in order of tasting):

Appearance:
Medium amber, and noticeably lighter than the other two.

Taste:
Right away tasters where guessing that this was a wheated bourbon, and I agree that it’s pretty obvious.  There was sweetness galore—brown sugar, dark cherry, caramel, vanilla, and dried fruit—but the very first remark about it was the noticeable cinnamon kick.  The tasters found a balance between the sweet flavors and just enough cinnamon spice with deeper leather and oak flavors.

Finish:
The finish continued with sweet flavors and was characterized as medium at first, but short when compared to the other two bourbons.

Appearance:
Amber brown; darker than the first glass, and barely lighter than the third glass.

Nose:
Especially compared to the first glass, the aromas were intense with pronounced oak and leather, but also with complexity of caramel, rye spice, black pepper, menthol, and floral notes.  It struck me that the aromas surprised some of the tasters after the subtle nose of the first glass.

Taste:
Everyone agreed that this glass had the most complexity with caramel, brown sugar, dark fruit, tobacco, cinnamon, pepper, clove, and oak.  Many of the tasters commented that they suspected this bourbon was the highest proof.

Finish:
L-O-N-G.  One taster wrote that minutes later the warmth was still swelling.  The sweetness faded first and the spices continued to linger.

Appearance:
Deepest brown of the three.

Nose:
The aromas started with a blast of rich caramel, along with cocoa, cinnamon, and charred oak.  As the only person who knew about the high proof, I was concerned about the consequences of vigorous sniffing, but while some heat was evident, there was no guessing that it was over 60% ABV.

Taste:
Candy bar sweetness heavy on the nougat, which was a totally different sweetness from the first glass, adding baked cinnamon apples along with robust oak, leather, and espresso.  While this bourbon was already a crowd favorite neat, a splash of water had the tasters raving.  The tasters were shocked when I told them that this was 123 proof.

Finish:
Long and warm without being overly hot. 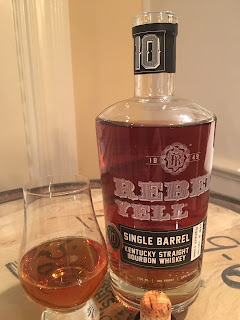 The first glass (Rebel Yell) was notably sweeter and “smoother” than the other two, which had several people guessing that it was a wheated bourbon.  Many of the tasters thought that the middle bourbon (Four Roses) was the hottest, and eight out of ten picked it as their second-favorite.  I expected Four Roses to be the favorite, but in hindsight, I suspect that the high rye and robust oak held it back in the comparison.  The third sample (Willett) was an immediate crowd favorite.  It completely hid its high proof, had a wallop of flavor, and took a splash of water the best.  Based only upon the blind tasting, Willett Family Estate had a slight lead, with Rebel Yell 10-year close behind, but zero first-place votes from the blind tasters for Four Roses Al Young 50th Anniversary.

The order shifted after revealing the original cost and current secondary pricing.  The group concluded unanimously and decisively that they would prefer “the $50 bourbon” at retail and especially at secondary market pricing.  Learning that the “nearly $500 bourbon” wasn’t anyone’s favorite got some chuckles and revisiting of glass number two to see what they were missing.  Revisiting the third glass—especially with a splash of water—got some of the tasters to ponder whether they might still rank it the highest if it were available at retail.


Finally, after revealing the brands, most of the tasters had associated Rebel Yell with lower-value bourbon, whereas they knew that Willett Family Estate and Four Roses Limited Editions had incredible brand value.  Perhaps in the spirit of investors who are supposed to find hidden gems and buy low, the tasters unanimously agreed that Rebel Yell 10-year was the best value, and they would rather have bought three of those at retail instead of one Willett Family Estate or Al Young 50th.  There’s something to be said for a banker’s logic.