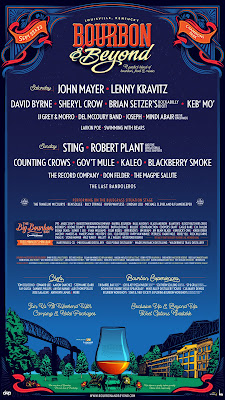 Bourbon & Beyond returns to Louisville this fall with an amazing musical lineup, incredible food, and bourbon galore.  Fred Minnick really puts the bourbon into Bourbon & Beyond because he curated a bourbon lineup to equal the musical and culinary lineups.  The festival will offer a unique series of over 30 bourbon and food-focused seminars, including the first-ever discussion between Jack Daniel’s master distiller Jeff Arnett and Jim Beam’s master distiller Fred Noe—called the “Jack and Jim seminar.” This will be historical, and something only Fred could put together.

Just as exciting, we have two other members of the Bourbon Community Roundtable moderating panels—Kenny and Ryan from Bourbon Pursuit and Blake from Bourbonr.  The last time we got together in person we came away with two barrels of bourbon, so you’ll want to be sure to catch up with us at Bourbon & Beyond.  Other local bourbon personalities like Maggie Kimbrel and Susan Reigler, along with rock star master distillers and brand ambassadors, will make this an unforgettable event.

Here are more details from the press release and links.  Tickets go on sale this Friday, April 20, so don’t delay!


April 20, 2018 update:  Use this link to purchase tickets: https://goo.gl/Pqbhqu
It tracks purchases to know that Sipp'n Corn fans are buying but don't worry, I don't get anything out of it (other than the pride of beating @Bourbonrcom and @BourbonPursuit).

The second annual Bourbon & Beyond festival makes its much-anticipated return to Champions Park in Louisville, KY, Saturday, September 22 and Sunday, September 23 with the perfect blend of bourbon, food & music not found anywhere else in the world. Festival producers Danny Wimmer Presents, culinary curator Edward Lee (The Mind of A Chef) and bourbon curator Fred Minnick have put together another incredible bourbon, music, and culinary lineup for the weekend. World-renowned musicians including Sting and Robert Plant And The Sensational Space Shifters, as well as superstars John Mayer, Lenny Kravitz, Counting Crows and David Byrne, lead the music lineup of more than 30 artists. Tom Colicchio, Stephanie Izard, Aarón Sánchez and Ray Garcia lead the culinary lineup of more than 20 chefs.

The world’s largest bourbon festival, Bourbon & Beyond is an annual celebration of the craftsmanship behind award-winning bourbons, master distillers, legendary musicians, world-class chefs, and an unforgettable showcase of the soul and spirit of Louisville, held during Bourbon Heritage Month. In its inaugural year in 2017, the festival attracted 50,000 people from all over the country, offering a series of onsite experiences, including bourbon and culinary workshops.