False Advertising and the Legacy of Duffy’s Pure Malt Whiskey.

The history of bourbon is full of legends, boasts, puffery and even outright lies, all in an effort to promote a brand and make a sale in a highly competitive craft.  Today’s false advertising and consumer protection laws have largely eliminated the lies, but who takes the all-time prize for false bourbon advertising?  James Pepper certainly seemed to stretch the truth; Paxton Bros. and the H.E. Pogue Distillery entered into a sourcing contract that a federal court held was “the perpetuation of fraud on the public;” and some unscrupulous whiskey rectifiers routinely defrauded the public until reined in by the Bottled-In-Bond Act and the Pure Food and Drug Act.

But one brand stands far above the rest as the ultimate fraudulent advertiser:  The Duffy Malt Whiskey Company.  To quote Lionel Hutz, Duffy’s advertising may be “the most blatant case of false advertising since … The NeverEnding Story.”  The Simpsons, Episode 67 (“New Kid on the Block”).  Nov. 12, 1992. 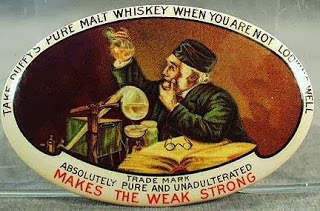 Walter B. Duffy (1840-1911) took over his family’s distillery, The Rochester Distilling Company, in the 1870’s.  By the early 1880’s, Duffy was advertising his Duffy’s Malt Whiskey not only as a tonic that “Makes The Weak Strong,” but also as a cure for all sorts of diseases.  Consumption, influenza, bronchitis, indigestion, and practically old age itself were claimed to be no match for Duffy’s Malt Whiskey.

Duffy quickly over-extended his company, and he was forced into bankruptcy in November 1886.  The collapse of the Duffy Malt Whiskey Company and the appointment of a prominent Receiver were widely reported The New York Times and other established newspapers, and lawsuits were filed as debts were resolved.  But just as James Pepper and Col. E. H. Taylor, Jr. emerged stronger from their own financial troubles, Duffy turned his company around, albeit with more false advertising.  Here are a few samples: 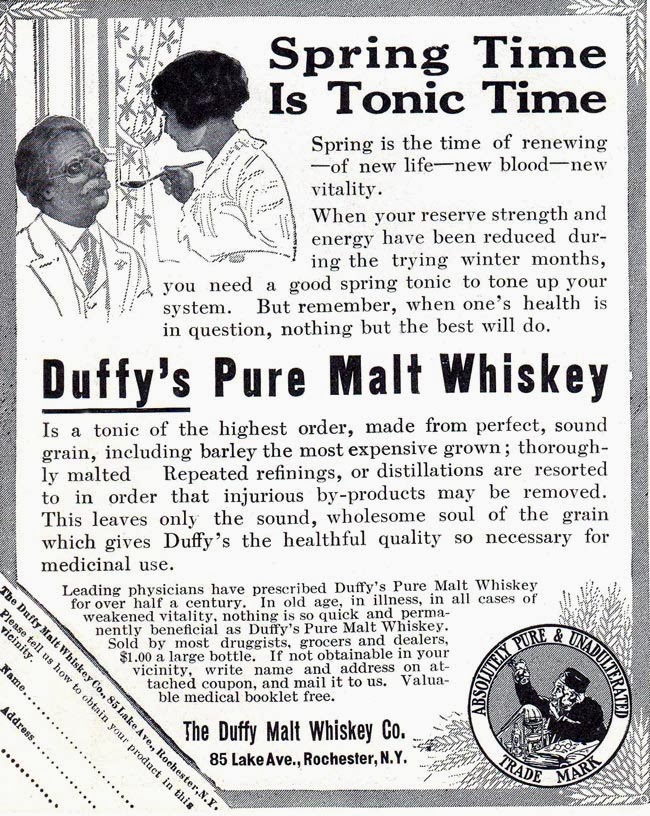 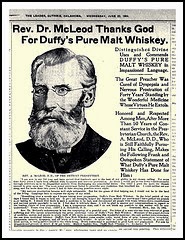 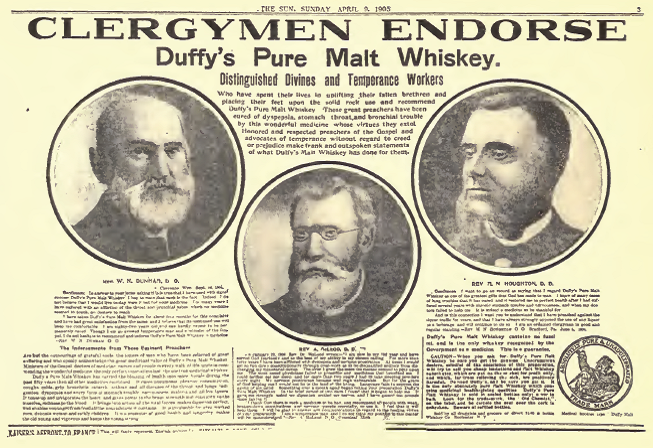 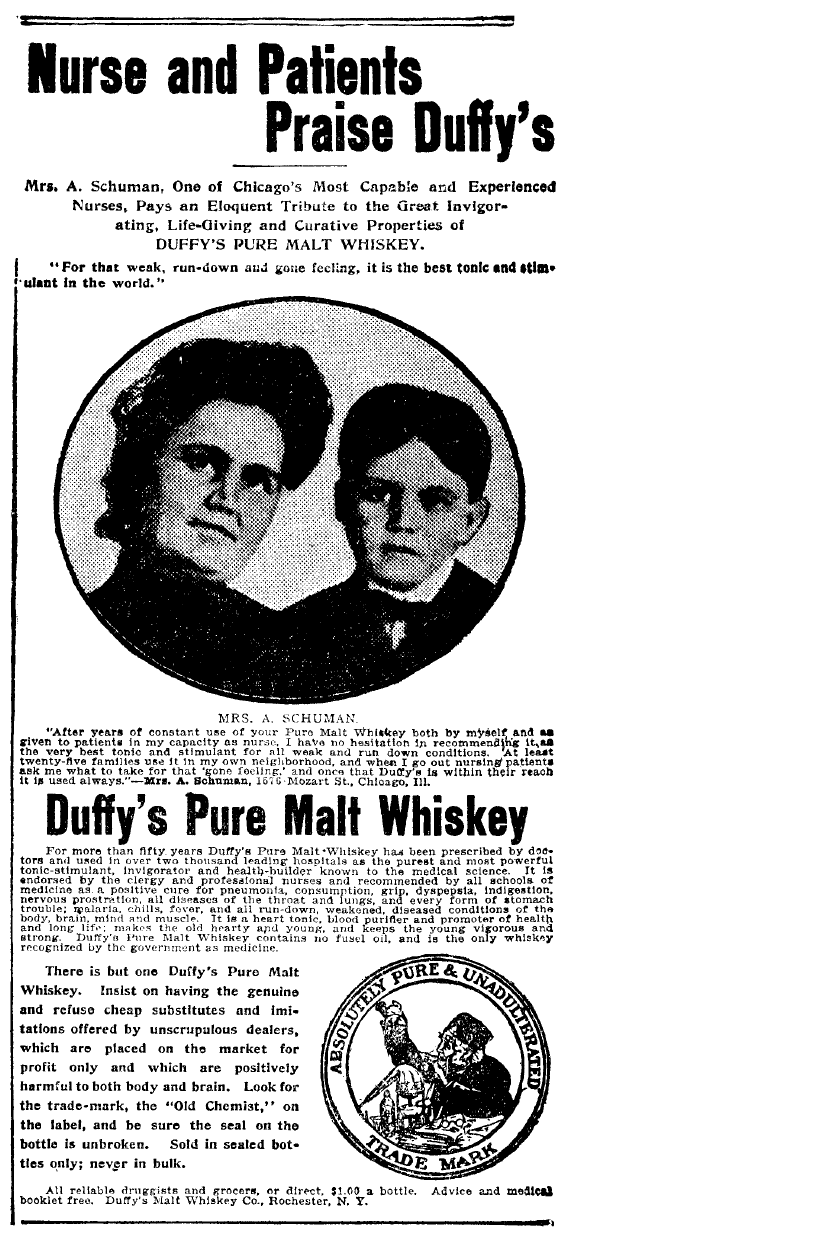 This last example led to litigation because Duffy’s sent The Chicago Sunday Tribune the wrong picture (it’s unclear whether intentionally, or not, or whether the testimonial was fabricated, or not).  In Peck v. Tribune Co., 214 U.S. 185 (1909) (written by none other than Justice Oliver Wendell Holmes, Jr.), the Supreme Court of the United States reversed two lower court decisions that had dismissed the libel claims of the plaintiff – the subject of the photograph – who claimed that she was not a nurse, and, moreover, she never drank Duffy’s Malt Whiskey (nor any spirit), and she never, under any circumstances, would recommend its use.

The opinion of the Seventh Circuit to some extent, but more so Justice Holmes’s opinion, give insight into the growing temperance movement as the country grew closer to national prohibition.  For a much better account of Duffy’s outlandish advertising and how it contributed to the eventual success of the temperance movement, be sure to read Whiskey Women: The Untold Story of How Women Saved Bourbon, Scotch, and Irish Whiskey, by Fred Minnick, at pp. 57-58.

In the meantime, Duffy’s revitalized company was so strong that he was able to withstand and prosper during the Panic of 1893, and by 1900 he had formed the New York and Kentucky Company which acquired the George T. Stagg Company and the Kentucky River Distillery (previously, and better, known as The Carlisle Distillery) in Frankfort, which together are now the Buffalo Trace Distillery.  Col. E. H. Taylor, Jr., in particular, was disgusted that someone who he considered to be a disreputable rectifier had come to own Taylor’s former prized distilleries.

While owning these historical Kentucky sites, Duffy continued to market his Duffy’s Malt Whiskey for its claimed medicinal benefits.  Through the early 1900’s, the challenge to Duffy’s false advertising was building.  Samuel Hopkins Adams wrote an exposé of so-called “patent medicines” (elixirs sold as medical cures, but without any actual curative benefit) in 1905 entitled “The Great American Fraud” in Collier’s Weekly.

The New York court had been considering whether or not Duffy’s was a medicine or a whiskey due to certain tax issues, and in Cullinan, as State Commissioner of Excise of the State of New York v. Paxon (1905), it heard expert testimony on that issue.  Experts noted the alcoholic content of Duffy’s and testified that a “search was made for added medicinal ingredients with negative results.”  Instead, they concluded that Duffy’s “is simply sweetened whiskey.”  Accordingly, the court declared that Duffy’s Malt Whiskey was a liquor, not a medicine.

Adams also refuted some of Duffy’s ringing endorsements, such as the “Clergymen Endorse” advertisement above.  Adams uncovered that one of the clergy pictured simply ran a “Get-Married Quick Matrimonial Bureau” and was paid $10.00 for his picture; another was a “Deputy Internal Revenue Collector” and racehorse owner, whose actual photograph was not used in the advertisement; and the third clergy was forced to resign by his congregation after they learned of his endorsement.  Adams also discovered that Duffy’s employees tricked some physicians into providing testimonials, for example by misrepresenting that they would not be used in advertising.  Ultimately, “The Great American Fraud” helped lead to the passage of the Pure Food and Drug Act in 1906.  This movement, along with the temperance movement and growing sophistication in medical knowledge, spelled eventual doom for Duffy’s.

Today’s claims of false advertising are tame by comparison.  Some people believe that Diageo’s product placement of Bulleit Bourbon on Deadwood (the HBO western series set in the 1870’s) constitutes false advertising because Bulleit was not introduced as a brand until 1999. 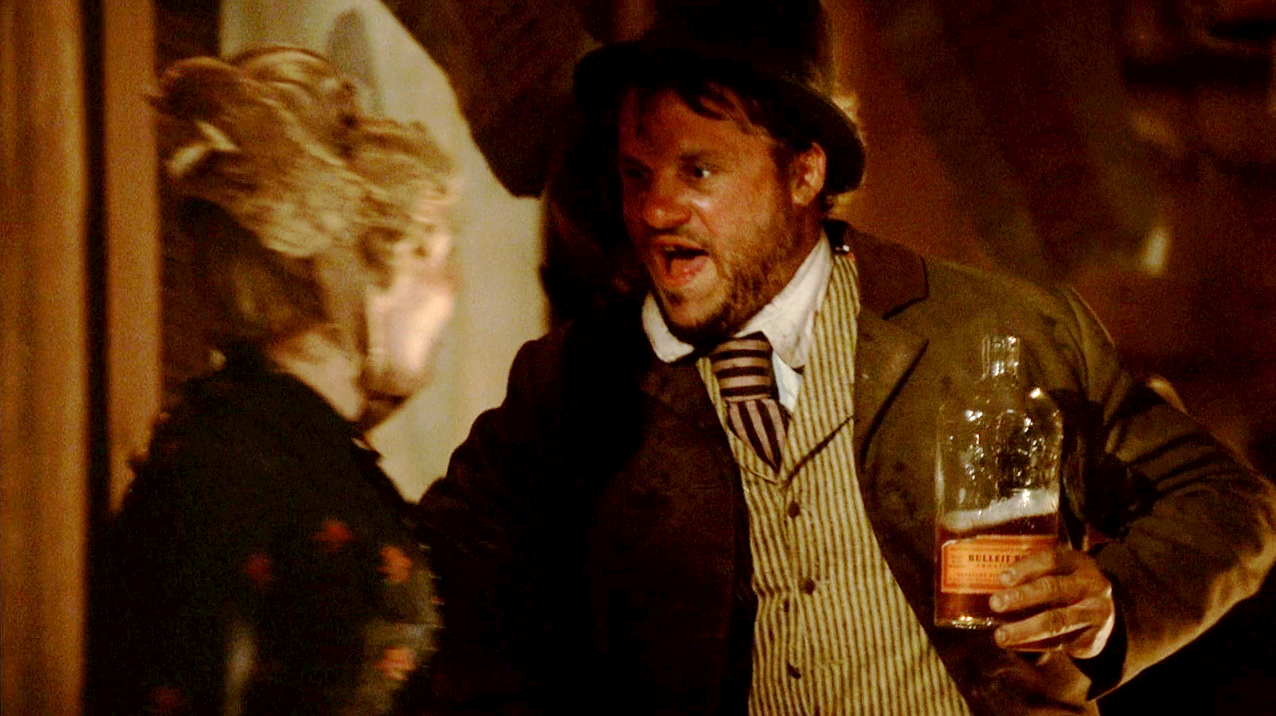 Others contend that bourbon brands that don’t distill or age their own bourbon engage in false advertising when they hide the true nature of their business and tout their Master Distillers (who don’t actually oversee any distillation).  Michter’s is often on the receiving end of this criticism. 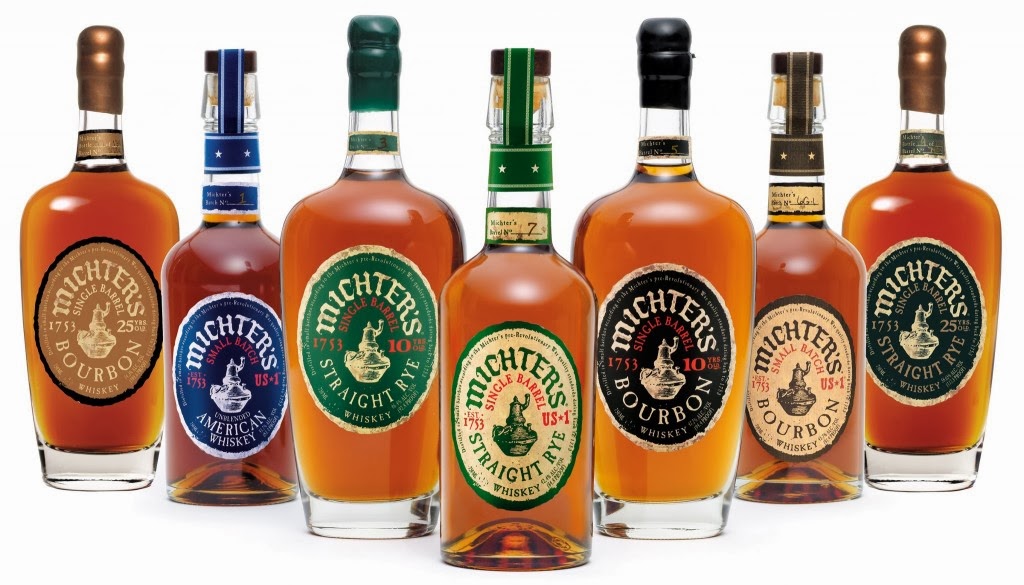 However these recent criticisms are viewed, at least we’re not being sold snake oil, and at least mendacious rectifiers adding things like tobacco juice, pepper sauce or potentially harmful adulterations to simulate age, color and flavor in our bourbon is a thing of the past (remember, some rectifiers had scruples and were simply blenders, or only added safe products, like brown sugar, prune juice, honey, tea and wintergreen).  So Cheers to Walter B. Duffy for his outrageously false advertising, which helped set the wheels in motion for bourbon we can enjoy today. 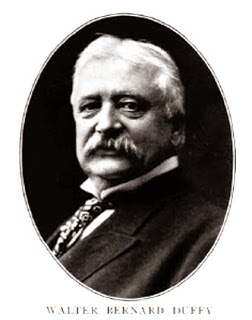